This headline can very well give you an insight as to how grim the circumstances are for Sri Lanka. The country has been undergoing an unprecedented economic situation. India’s island neighbour that had the GDP of almost $84 Billion and was growing at a steady rate of 6.4%, outperforming most of its regional peers, is now faced with acute shortages of food, fuel and other essential commodities. In today’s times where the lives of people around the world had turned upside-down and were barely returning to track after 2 years of COVID19 pandemic, nature had other plans for the Sri Lankan denizens. No imminent signs of recovery can be seen for them. This has made it tough for the public to keep their body and soul together.

The foreign exchange reserves are hard hit and have dropped to as low as $2.8Billion that made financing the imports all the more difficult. Due to the supply-demand mismatch the food inflation hit a record high of 30.1% in the month of March. The long lines for fuels, cooking gas and long hours of power cuts have added to the misery of the public. Anger, frustration and distress forced the people to come out on the streets and protest against the administration, consequent to which, the government imposed an emergency on 1st April,2022 which was withdrawn within a week given the opposition faced by the government for the harsh decision.The challenging circumstance has forced the policy makers to seek a bailout from The International Monetary Fund and fresh loans from India and China. 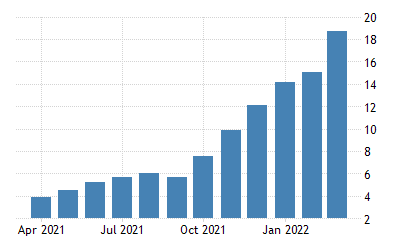 The graph above depicts the inflation rates of Sri Lanka that have grown exponentially over a span of a few months. There has been a sharp rise from 4% in April 2021 to almost 18.5% within a year. Price of staple commodities like rice stands at around Rs200-Rs240 per kilogram. Milk powder is at Rs790 for 400 grams. The consumer basket has become way too expensive and the purchasing power is being eroded fast enough.

What is even more surprising is that the country which was better ranked than India in all spheres of the Human Development Index is on the brink of bankruptcy . It’s simply not possible that a single factor led to this outcome. Analysts believe that the causes date back to 2014 and the pandemic just hastened the crash of the economy. The roots lie in the economic mismanagement of numerous governments, the ever-growing external debt (which is now equivalent to an enormous amount of $7Billion as of March 2022) and financial overreliance on nations like China for the fulfilling it’s infrastructure centric growth model. China has been one of the leading financiers for the nation and has invested up to $12Billion from 2006 to 2019 in projects like Colombo Port City and Port of Hambantota. Due to Sri Lanka’s inability to repay the amount, they have to either give up the control of the ports that are of great strategic importance or take out other loans to reimburse the previous ones. Researchers called this the “debt trap diplomacy” done by the Red Dragon. Also, international organisations like the IMF or World Bank weren’t the first choice for credit since that would mean political-policy interference from them. Hence, they turned to other nations for lease.

Further, the government’s aim to convert the nation’s agricultural sector into a 100% organic one, backfired. The ban imposed on the imports of chemical fertilisers aggravated the situation by impacting the overall agricultural production. The intention was righteous yet it was the drastic implementation of the program that led to its failure. The government’s revenue further took a toll when the president Gotabaya Rajapaksha delivered his 2019 election promise of deep tax cuts in the hope of better cooperation from the side of taxpayers. Unfortunately the aftermath was not what they had expected as tax revenue plummeted due to the lockdown. The timing was again not in favour of the nation.Apart from the inefficient regulation and decision making, the COVID19 pandemic worsened the state of affairs by forcing people to stay indoors. Tourism that amounts for approximately 12.9% of the country’s GDP was one amongst the worst hit sectors as well as the foreign workers’ remittances sapped. The industry was already undergoing a downfall since The Easter Day bombings in 2019 and could only see a slight rebound in November 2021.

To deal with this, the leaders of the nation have taken series of steps which includes declaration of economic emergency and giving the charge of seizing food supplies from traders and dispensing them among the consumers at fair prices to the army, as the administration believed that hoarding is a major driving force in the upward trend of prices. Since a miniscule amount of $2Billion is left with the nation in foreign reserves, priority has been given to imports of  indispensable items. The political leader is reluctant to reverse the organic farming decision citing that short term agony will definitely be overpowered by the long term benefits. In addition to this, so as to release the pressure on farm lands, a promise has been made to disperse organic fertilisers to the cultivators. Apart from this, the president and prime minister have formulated a plan and approached the IMF to secure an immediate bailout fund of $4Billion to bring the economy back on track. Although it will be an uphill task for the officials to raise this kind of funds, it is critical for them to stabilise the balance of payments crunch.

Only time will let us know whether the measures were good enough to sustain the 113th ranked nation, but as of now, no respite can be seen for the 2.19 Crore Sri Lankan denizens .All 26 union ministers have resigned since the beginning of the downfall. The president and Mahinda Rajapaksha, his brother and the Prime Minister are faced with the growing political unrest since their family  has dominated the Sri Lankan political spectrum for over two decades

is blamed for syphoning huge amounts of money received from international foreign markets and sovereign bonds, that has now piled up and is exerting financial pressure on the economy.

No one can say for sure but it is extremely essential for the situation to stabilise and the livelihood of thousands of people is no longer threatened because of a few powerful dishonest individuals.