No, it’s definitely not the end of Lays’ and Uncle Chipps in the market but something thousand times bigger than that! The crisis is in relation to the digital universe. There exists a point of commonality between all the fancy electronic gadgets ranging from iPhones to One-Plus to laptops and MacBooks. All the devices have a significant, noteworthy yet inconspicuous element in the form of Semiconductor Chips. The role played by oxygen in keeping us alive is exactly what these chips are for the modern digital world. Along with the consumer electronic items, these chips are requisite for social infrastructure like operation of ATM’s, trains, the internet, communications, medical network and military systems. No doubt that the shortage of these can bring the individual’s life as well as the economy (to a certain extent) to a halt. Unfortunately, we are on the brink of such a catastrophe.

Since 2020-21, there has been a supply crunch of semiconductor chips. Their scarcity has had far-reaching effects on numerous industries ranging from leading electronic companies like Apple to the automobile sector which was already bruised by the pandemic and is likely to see a delay in its recovery, thanks to this global outage. 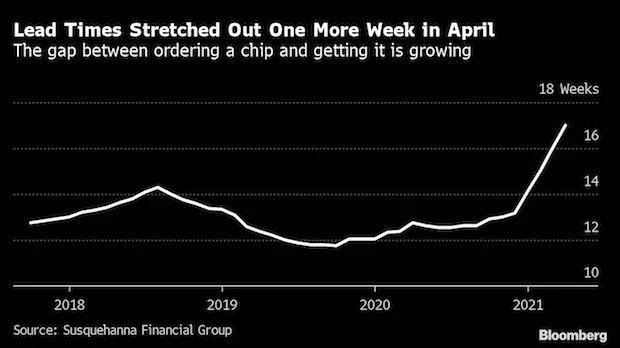 The graph above clearly depicts the pressure on the supply chain for semiconductor chips and the growing time gap between the order placed and received over the past 4 years. A steep rise has been seen between 2020 and 2021. The factors that contributed to these circumstances have been discussed further in the article. After getting an insight about the situation you can very well figure out that this is not something that can happen magically over a fortnight. It’s how different forces worked and finally the bubble burst.

So, what exactly caused this chaos? Since 2020 onwards most events occurring are attributed to one-single factor, that is, COVID-19 outbreak and this predicament is no exception. Acting like a catalyst, the lockdown-like restrictions ensured that the raw materials pre-eminent for chip manufacturing were not obtainable. This led to a dearth in the supply of chips. Simultaneously, the Zoom calls/Google-MEETS being the ‘new-normal’ gave a boost to the demand for electronics. Since it was an arduous and unprecedented situation for all, manufacturers couldn’t keep up with the trend and the gap between the two (supply and demand) escalated.

Accompanied by this was the lack of perspicacity and poor decision-making prowess displayed by the car companies. They canceled chip orders in the apprehension that the demand will continue to be on the lower side due to COVID-19. Surprisingly, slight recovery was seen in the automobile industry despite the pandemic. This created pressure on the companies. To top it all was nature not favoring humans either. Winter storms in Texas, drought in Taiwan and fire at Japan’s chip plant (The top 3 plants that contribute to almost 87% of total chip production) strained the supply chain even more. 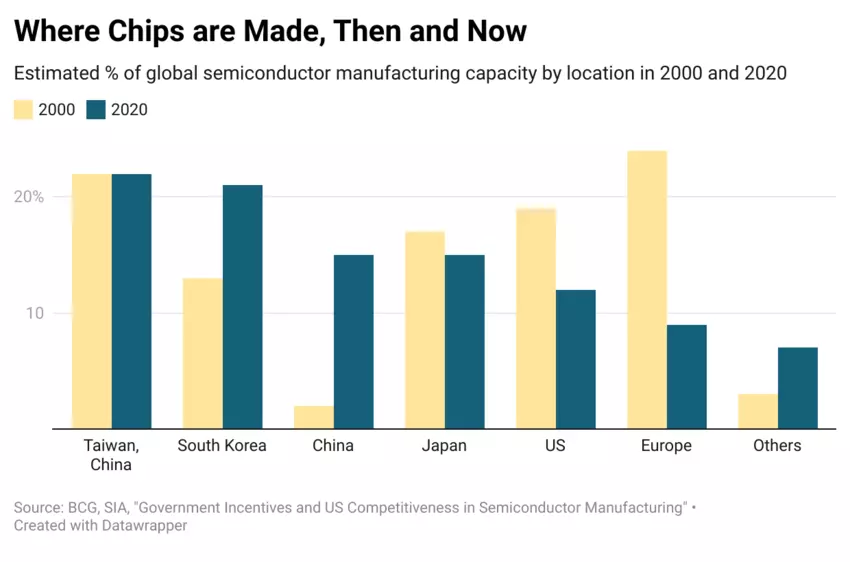 The graph above depicts how much share each country has in the global chip supply. Taiwan Semiconductor Manufacturing Co.Ltd is still one of the leading producers especially in the manufacturing of advanced chips. Their market share is approximately 50% as per 2021 data by Taipei-based research firm TrendForce and their major clients are technology giants like Apple, Qualcomm and Nvidia. Also, with the clash between the world’s largest economy(United States) and the fastest growing economy(China), the entire mankind suffered. US imposing restrictions on China’s leading chip plant forced countries with American ties to bank on the rest of the chip manufacturers (which were already operating at full capacity) and concurrently, Huawei, the leading Chinese IT company was coerced to also rely on other plants when US stopped the supply of chips to them exacerbating the pressure on rest of the chip plants.

Along with this, the ongoing Russia-Ukraine crisis further strained the supply. The warring nations control the exports of vital raw materials that go into the production of chips. Russia accounts for 44% of the global palladium supply whereas Ukraine accounts for a whopping 70% of the global supply of neon – the two key inputs for manufacturing. All these factors led to spiraling prices for the electronic commodities putting the automobile and IT sectors in a tight spot.

Even though the outage has had cascading effects worldwide, it is important to understand that everything has its own pros and cons.The same is applicable in the current situation as well. Indian policymakers were able to unearth the silver lining to this dark cloud by putting forth the Rs.76,000 Crore package plan to attract chip makers and manufacturers to India and make us the next biggest destination for chip manufacturing. The crux of this plan of action revolves around how to certitude easy access to the factors of production.

The facets of this policy include, the Government of India will endow 50% of the entire project cost of 2 eligible companies for chip production, certifying CAPITAL availability to them. Second is financing the universities to upskill engineers in this field and quantify the presence of cheap, adept labour in the market. The last but not the least is making sure the ‘brain and body’ stay in the country itself. The goal is to tweak the already existing pattern wherein the local chip design makers had to get their products outsourced from a foreign manufacturing plant like Taiwan, by proselytizing manufacturing in the country itself. No wonder one can arrive at numerous benefits of this for India, be it in the form of saving foreign currency (we spend $24 Billion annually on Chip imports), strengthening employment conditions or stiffening India’s position on the global stage. Yet, it is not all glamorous as it seems on the surface. Certain hiccups exist for the administration.

This is not the first time the Indian government has decided to work on this aspect. In 2007, Intel had shown interest but moved to China and Vietnam instead as the Indian government’s policy and incentives were not thought through. In 2013, the government approved two proposals by Jaypee Group and HSMC with a promise to subsidise the project cost but the projects were aborted as they failed to attract investors and generate financing. Again in 2017, the country reached out to global firms and offered to waive customs duty on the import of machinery, but that didn’t amount to much.

The attempts failed as India could not guarantee the uninterrupted 24×7 power and clean water supply. Another must-have for the manufacturers is a pollution-free environment and very clean rooms. Even a single speck of dust can compromise a chip, costing millions of dollars. Ironically, India has 46 of the 100 most polluted cities in the world. Hence, it is not a very attractive place for manufacturers to set-up their production units.

‘Making mistakes is inevitable, learning from them is what matters.’

Filling the aforementioned gaps should be the prime focus for Indian executives. Undoubtedly, we can not argue whether this will help India bloom and move a step closer to its vision of ‘ATMA NIRBHARTA’ or not. Yet, putting effort is the first and foremost thing. Arrangements should be made in a manner that has the power to transform India into a global hub for semiconductor chips.

World Economic Forum. 2022. Chip shortage: how the semiconductor industry is dealing with this worldwide problem. [online] Available at: <https://www.weforum.org/agenda/2022/02/semiconductor-chip-shortage-supply-chain/> [Accessed 1 May 2022].

(Chip shortage: how the semiconductor industry is dealing with this worldwide problem, 2022)

Vanamali, K., 2022. Will India be able to attract global chipmakers with $10 bn incentive?. [online] Business-standard.com. Available at: <https://www.business-standard.com/podcast/current-affairs/will-india-be-able-to-attract-global-chipmakers-with-10-bn-incentive-121121700069_1.html> [Accessed 1 May 2022].

Pib.gov.in. 2022. Cabinet approves Programme for Development of Semiconductors and Display Manufacturing Ecosystem in India. [online] Available at: <https://pib.gov.in/PressReleasePage.aspx?PRID=1781723> [Accessed 1 May 2022].

(Cabinet approves Programme for Development of Semiconductors and Display Manufacturing Ecosystem in India, 2022)